Last week, we had a nice and long chat with Mark Sassenrath, the lead designer for the Shawarma complex at Myths of Runeterra. With the release of a new Guardians of the Ancient collection today, we decided to interview Mark about the specific design process, including keyword development.

W.We particularly emphasize the ability of the keyword, Blade Dance, in our discussion.

PCI: What is the new keyword and what to do?

Sassenrath: It’s called Blade Dance, and it’s a new mechanic of Irelia’s deck of cards – an ionic keyword. It’s not a decent keyword like Overwhelm, but it’s a keyword action like Predict. Summons code codes that do free attacks like Disaster. So, if I had a card that says “Blade Dance 2”, an Attack Row with two blades will be created. It’s made for aggressive combo plays and is in tune with the effects that occur when summoning or attacking.

Several Ionian, Shurima, and Bilgewater cards also trigger these actions, like Azeer, As each blade will summon a sand soldier. Deck tends to operate very quickly and multiply these advantages. He wants to finish the game quickly because it doesn’t have a lot of draw or feature cards.

PCI: Will there be other cards in this new deck specifically to support Blade Dance?

Sassenrath: There will be some. Ionia will have a card pack with some Blade Dancers and cards paired with them. But a lot of the cards that are associated with it have already been released. One of the most powerful groups with Irelia is Azir. If you want to play Azir hard then he is a great duo with Irelia.

PCI: So it’s less support for a particular keyword, and more than just general support for the things it naturally associates with?

Sassenrath: Yes, there are some cards that have effects like “When you do Blade Dance,” but mostly effects like “When you summon an ally” or “When you attack” that you work with. When she is three to five years old it turns crazy and he can do it a lot. Your first turn or two will be a lot of preparation, as is Azir. But once you get these setup pieces in the first couple of turns, you can attack multiple times per turn, even in defensive turns. 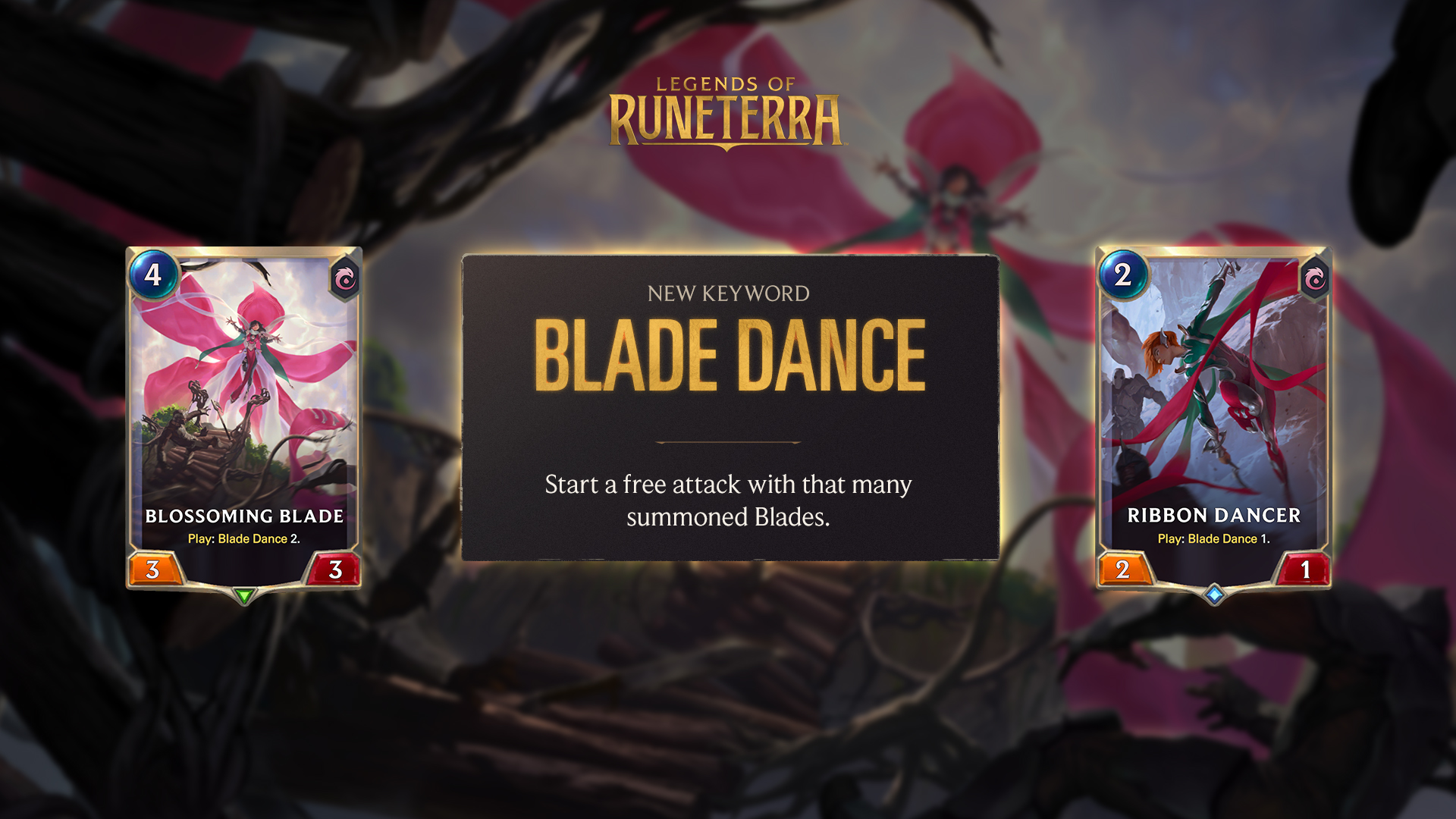 Sassenrath: In this case, I think a lot of the pieces that pair well with it actually worked well together. Likes, Greenglade Duo She is the strength of the group, and I don’t know if we’ll ever print something really better than that * laughs *. We can’t prove everything in the future of course, but for me that wasn’t where we’d be building a very specific pair of mechanics and hopefully nothing else enters this ecosystem. We were working on what really looks like very strong hooks are already in place. Hopefully, this is a space that isn’t crawling much but we’ll see * laughs *.

PCI: Plus, since it’s a digital card game, it’s a lot easier to make changes on the go when an unexpected interaction arises.

Sassenrath: Yes Yes. We do a lot of direct balancing, so when things go wild, or things get stronger over time, we can do something about it. 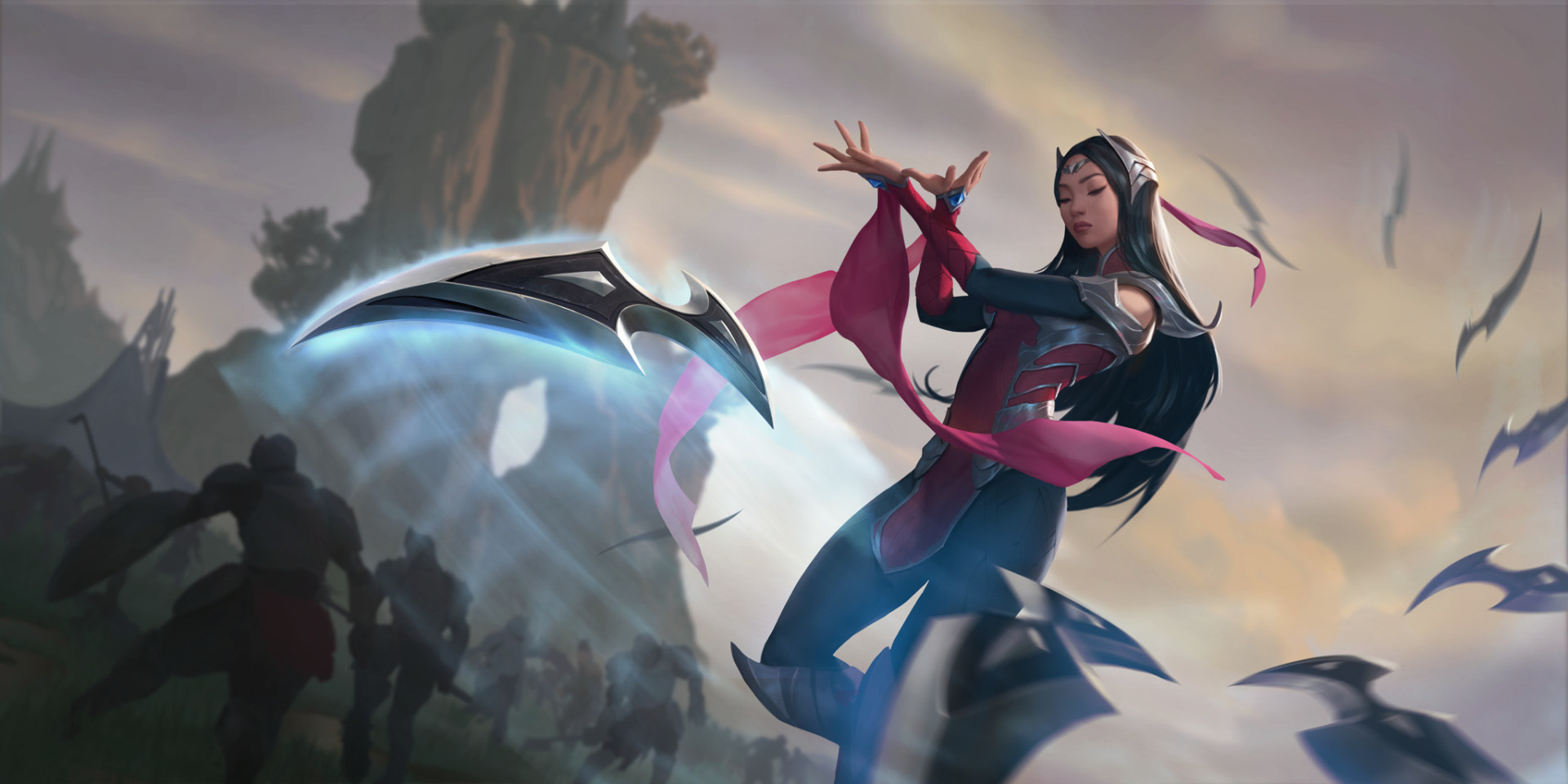 PCI: So what’s the normal process when you start developing a new keyword?

Sassenrath: I think overall for most of the design process, we tend to not be really thinking in terms of keywords as much as others might have expected. We tend to work on things like themes, main mechanics, and patterns. Often times we won’t even decide if the mechanic will have a keyword until late in development. This is not always true but in many cases it will be. For example, with a Scars card in the first set, they could have had a keyword but didn’t. But something like Depp did. A lot of the reasons are that there are pros and cons for something that becomes a keyword. It’s something new that players learn, but once they learn, it becomes a reusable concept and a hook that we can refer to elsewhere.

For a lot of these keywords, it’s not clear as we work on them how they will turn out. It could be a self-contained keyword, triggered with custom output, or not a keyword at all. For a lot of the mechanics we do, either we want to express a major theme or hero theme or facilitate a specific conjugation that we thought would be great. When it comes to Blade Dance in particular, compared to most of the keywords, this one was mostly top-down. Meaning, we wanted to represent Irelia’s Blade Dance thematically. But it was also bottom-up mechanical in the sense that we wanted to find some fun things that Irelia could do when paired with Shurima. 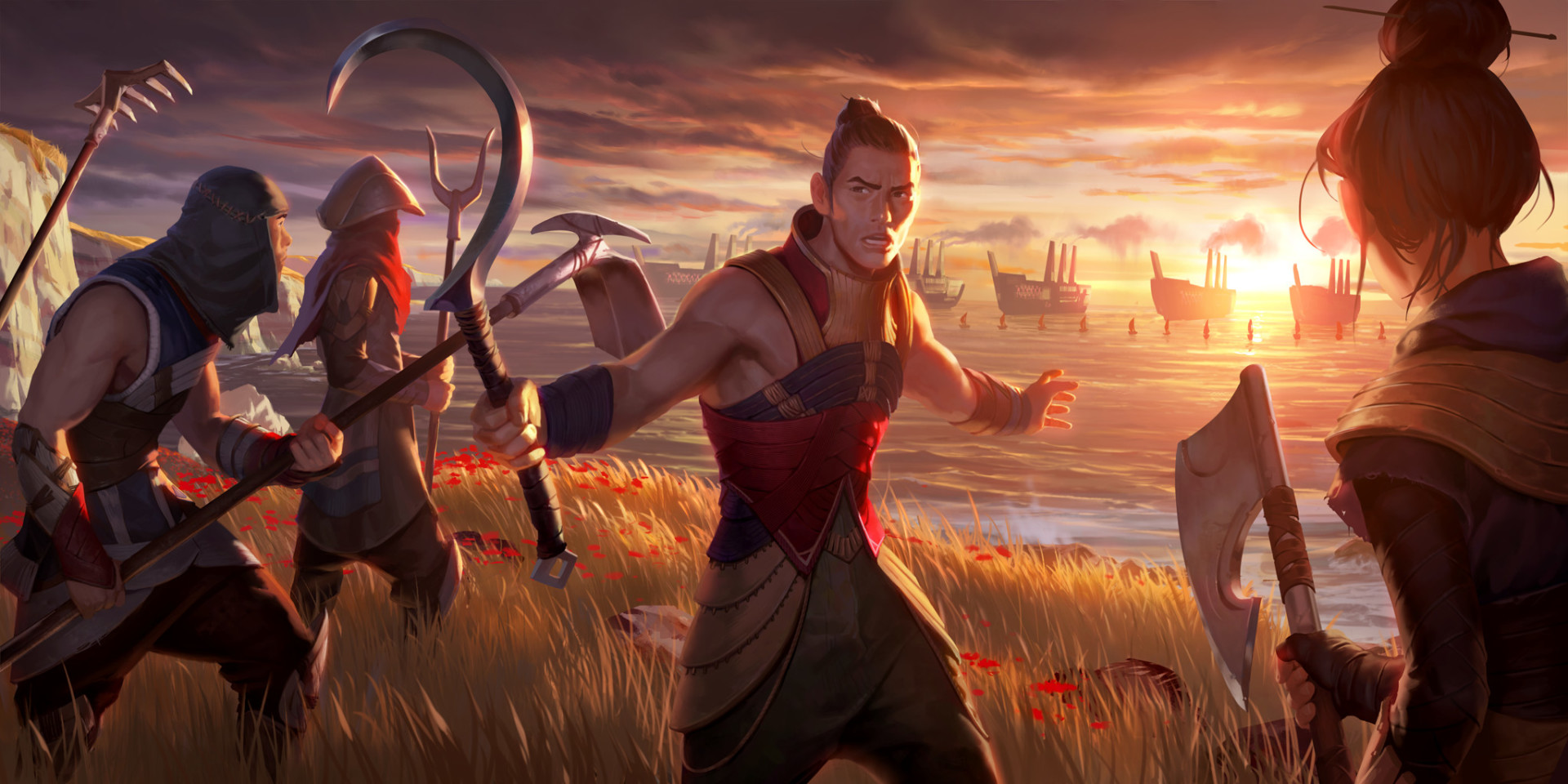 Sassenrath: When we introduce a new faction, we want to build some hooks for players so that every possible duo has at least something to work with. So, when we were working on Irelia, a lot of it had to do with her skilled military prowess and how we can express it. This went through various stages. One of the first of those attacks involved launching an attack that would act like an “attack: impact”. It ended up getting very complex and led to a lot of evergreen and future risk space as this is a common trigger. So we’re back to the drawing board after exploring that a little bit.

At some point fairly early on, the Azir text line got settled fairly early in the card file and we thought we could do something in that space with the cards triggered on call like Sand Soldiers and Greenglade Duo. Irelia being the client’s master felt a bit strange, but we thought there would be a version of it where she works. Since the blades are less than ephemeral, they are hardly modular. They only exist to attack and then disappear. So the tendency to this was more objective, more expressive of a military warrior with weapons. The total card pack revolves around taking these pieces that Shurima and Ionia can bring to the deck of the Minion Master, and make this feel even more aggressive with waves and waves of hail.

PCI: So, you might say that the keyword has less impact on the personality than the character has had on the keyword.

Sassenrath: Yeah, I would say we were basically trying to do two things. We wanted to capture Irelia’s code dancing thematically and we wanted that to be something useful to pair Ionia and Shurima. Hope it works well. 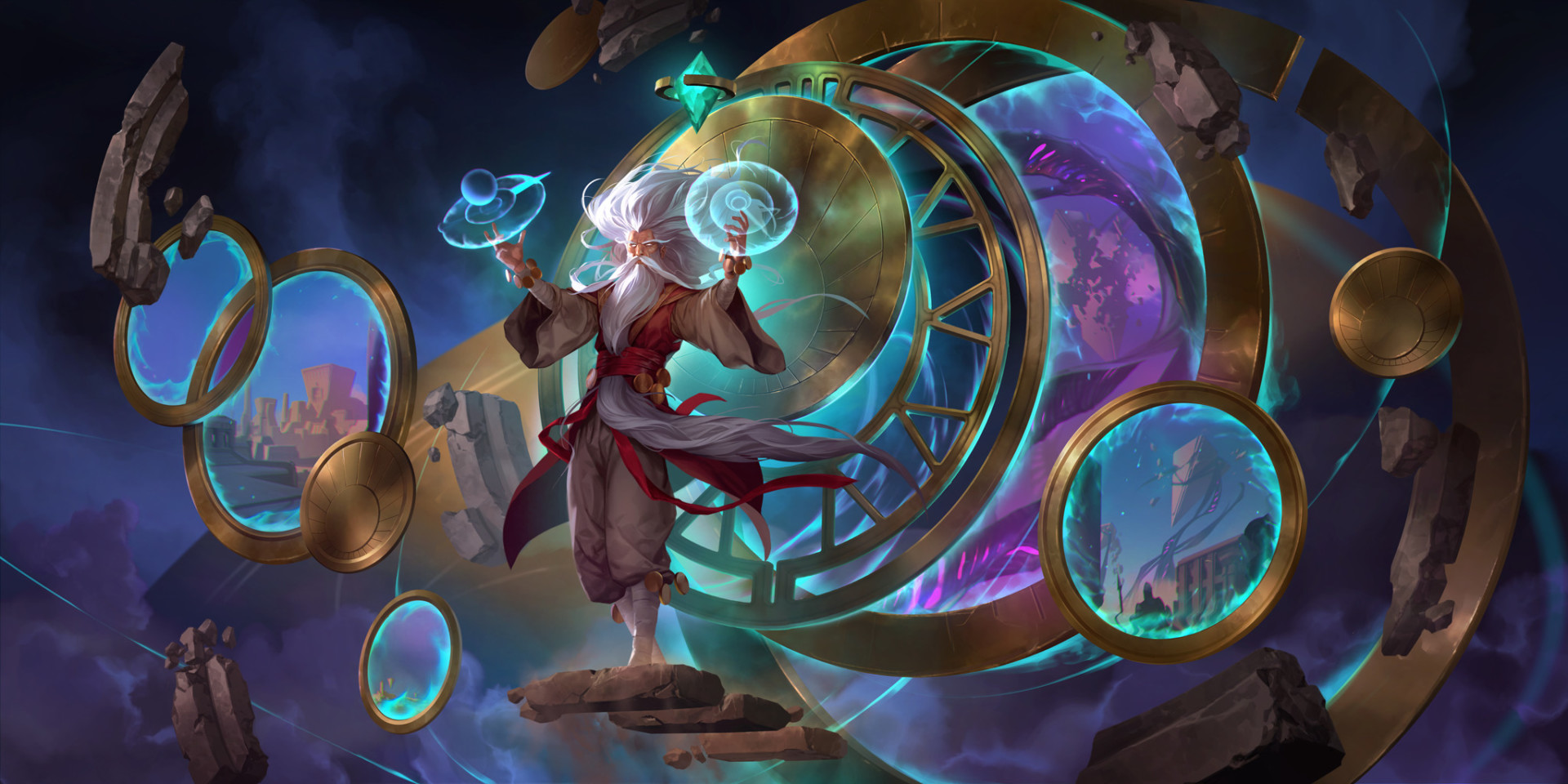 PCI: Are there keywords or abilities left in The Guardians of the Ancient Cutting Room? Maybe they were too strong on the test or ended up being too silly?

Sassenrath: When we explore the mechanics early in group development, it is somewhat natural for many of them not to go far. If I said the infection rate was 50% or less, it wouldn’t surprise me. There are others that we ended up using, but not enough to make it a complete keyword. For example, at one point Geomancy was a keyword. You can still see the remnants of that because some of the cards specifically denote landmarks that are still stuck. But we found that we just didn’t use it enough, and the keyword didn’t have enough weight to make it worthwhile. So we ended up essentially “removing the keys”.

Also, with the time-handling mechanic that we were trying to achieve with Predict, we were hoping for something that seemed to be more of a time magic than just “give me a + 1 / + 0”. Which fits into something like Augment much more than that, and is a metaphor for self-improvement. More than something for a character like Zilian or one of his scientists. The deck manipulation was important in other ways than just a general statistical bonus that was much more interesting to us. So most of the prediction rewards you see in the Shurima expansion tend to be more outlandish like “When you see me in anticipation.”

PCI: I agree Predict makes more sense objectively as it currently is. It fits best with the “choose your destiny” theme that occurs with the group and the characters involved.

Sassenrath: Yes, and you’ll see other things in the next drop reward you for tinkering with your deck, but I’m not messing around too much.